I am pleased to inform you of the creation of a Technical Committee “Levees” within ICOLD.

The General Assembly of ICOLD voted and approved this creation during its meeting last Friday (07/07) in Prague, at the 2017 annual meeting.

This excellent news for the international Levees and Flood Defences community is the result of many years of work and actions that have demonstrated to the Large Dams community the interest of working on Levees as well:
– the International Levee Handbook (2009-2013),
– inclusion of the topic by many National Committees, including CFBR (France), NETHCOLD (NL), USSD (USA), BDS (UK) and many more,
– creation in 2015 of our Working Group under the European Club of ICOLD on “Levees and Flood Defences”,
– recognition by the European Club and ICOLD Boards of our WG activity,
– of course, the vast amount of research and guidance from many recent national and international projects (including National Committees products),
– the active support of the National Committees from France, Netherlands and USA and the receptivity of the ICOLD Central Office and Board,
– finally, the vote of the member countries representatives in the General Assembly.

The creation of this Technical Committee (which I hope will have a fruitful production), coupled with Question 103 (Small dams and levees) of the next ICOLD Congress in Vienna in 2018, makes it possible to consider that these particular structures definitively join dams, large and small, among the topics of this major international organization in the field of Hydraulic Works: ICOLD; even if we are not yet ready (joke) to change its-laws or to rename ICOLD as the International Commission on Levees and Dams.

Next year will be essential in terms of activity. We will have to work hard in the EurCOLD LFD WG to present final deliverables to the European Club. The new TC will have to produce draft Terms of Reference and prepare its first Meeting and Workshop in 2018 ICOLD Congress in Vienna, where its ToR will be finalized. The transition between the two groups will need to be as smooth as possible.

Finally, I was chosen as Chairman of this new Technical Committee, which must eventually succeed and replace our European Club WG. I thank all the colleagues, within and without our WG, and from many countries and National Committees, too many to name them, who made all this possible. This is just a beginning! 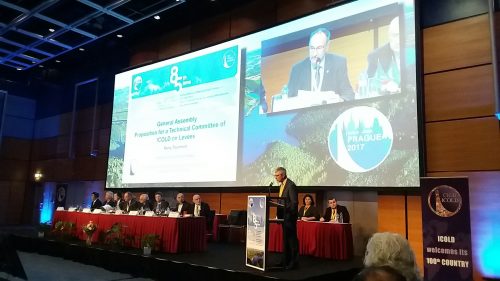 During the General Assembly: introduction of the proposition by ICOLD President, Mr Anton Schleiss
Picture by Eija Isomäki 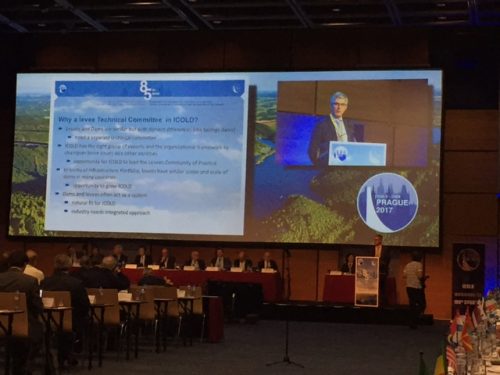 During the General Assembly: defending the cause of Levees
Picture by Cees Henk Oostinga