Webinar on emergency repairs of levees – A call for speakers

Disclaimer : this is a personal feedback on the ICOLD Congress in Marseille, obviously in regards to levees (by Rémy Tourment, Chairman of the ICOLD TC LE on Levees)

First of all, check the ICOLD newsletter (issue #20) that you can download here : https://www.icold-cigb.org/GB/news/newsletters.asp where you can see that levees are taking a rightful place in ICOLD topics. 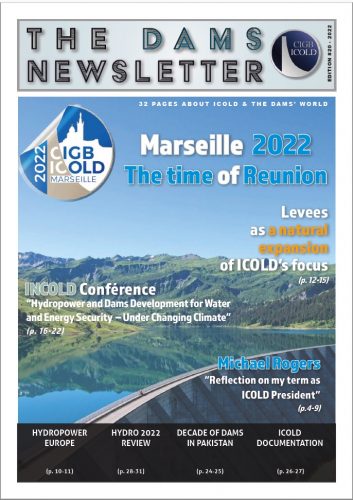 1/ Strong support from ICOLD President Michael Rogers
It is an euphemism to say that the levees topics and issues had these last years a very strong support from ICOLD President Michael Rogers and its inclusion in the long term in ICOLD. During the Marseille Congress, his support has been strong and continuous.
In all of his many public speeches over the course of the days, he often mentioned levees, talking many, many times about “levees and dams” instead about simply “dams”, which is a good way to have the message to all ICOLD Committees (national and technical) really anchored in the mind of our ICOLD community.
In the ICOLD Newsletter #20, published at the occasion of the Congress, a four pages article “Levees as a natural expansion of ICOLD’s focus” he clearly calls for this inclusion. He also mentions our TC in his article “Reflections on my terms as ICOLD President” where he has very nice and touching words.
I take this opportunity to once again sincerely and warmly thank Michael for his interest and support to the cause of levees over these years. I wish that I’ll have many other occasions to meet him again and maybe work with him in the future.
2/ Election of new ICOLD President Michel Lino
This congress was the occasion for the election of the new President.
Michel Lino, until very recently President of French Committee CFBR and now resigned, has been elected as President of ICOLD.
I’ve known him for many years. His knowledge and awareness of levees is great; he has been one of many supports of levee issues in CFBR.
I have no doubt he will also be supportive of levees issues in ICOLD during his coming term as President.
3/ Short course on Risk Analysis of Levee Systems
On Friday 27 May, the day before the official opening of the Congress, a series of shorts courses were organized as options by the French committee. I was the coordinator of one of these, on the topic of “Risk Analysis of Levee Systems”.
Before this last Friday I was rather disappointed because of the small number of registered participants by comparison to our initial expectations. I was also somewhat afraid the audience would be disappointed as the course was tailored for rather junior processionals (at least that’s what I thought), while we mostly had experienced colleagues registered, including some TC LE members.
Actually, the workshop went very well, and from my own point of view it was very interesting as the questions and discussions were pertinent and thought provoking. I can’t speak in the name of the attendees, but our TC colleagues David, Malcolm and Patrik may give you their opinion as attendants.
Presentations can be downloaded from here : https://barrages-cfbr.eu/Marseille_cours_condenses.html
4/ Workshop of the ICOLD TC LE
We had a two hours workshop on Saturday 28 May. Its objective was mainly to present our two bulletins and get feedback from guests (ICOLD members not members of our TC).
Although I don’t have time to give you details, we were very pleased to have only positive and supportive comments. There were also interesting ideas that we can use in the future.
5/ Annual official meeting of the ICOLD TC LE
The TC meeting went also very well and was productive (as said above detailed notes will be shared).
We made the most of the available time (8 hours in total), and, even if we could have used more time for more details and exchange of ideas, we managed to deal with all our agenda items.
We are happy to welcome new members replacing members who could not manage to be active (Canada and Poland) and also new co-opted members.
A time was devoted to the EUCOLD WG activities, which also were reported during the annual meeting of the board of EUCOLD
6/ General Assembly
6.a –  ICOLD President Michael Rogers again mentioned at different times during the General Assembly levees as one of the important topics (see point 1 above).
6.b – Our bulletin “Levees and flood defences across the world – Characteristics, Risks and Governance” has been approved during the ICOLD General Assembly: all positive votes, no votes against, no abstentions.
6.c – I made a presentation later during the General Assembly, presenting our work, our deliverables and their consistency, and the plan we have to finalize the “dams-levees comparison” during the next year, including the advanced review by national committees and some technical committees. I called for more interaction with other TCs, and the involvement of national committees.
7/ A chapter about French Levees in the Congress commemorative book
Chapter 9 of the book prepared by the French Committee at the occasion of the Congress, with a lot of attention and many contributors, is dedicated to levees. I invite to read it (as well as the rest of the book…). You can download it here : https://barrages-cfbr.eu/Marseille_livres.html
8/ Monograph on French levees
You can find here a series of descriptive leaflets on levees and levee systems prepared at the occasion of the Marseille Congress by members of CFBR: https://www.barrages-cfbr.eu/Marseille_monographies_digues.html and also download all them from: https://www.barrages-cfbr.eu/IMG/zip/monographiesdigues.zip
9/ Site visit on the Camargue levees
I won’t talk about it either, as it happened in parallel to the General Assembly that I attended, so I wasn’t there. In any case I am sure it was a success as I know very well the very interesting sites and different projects, having participated myself in some ways, and knowing the actors of the main interesting of these projects: Thibaut Mallet from SYMADREM and colleagues from SNCF and SYSTRA.